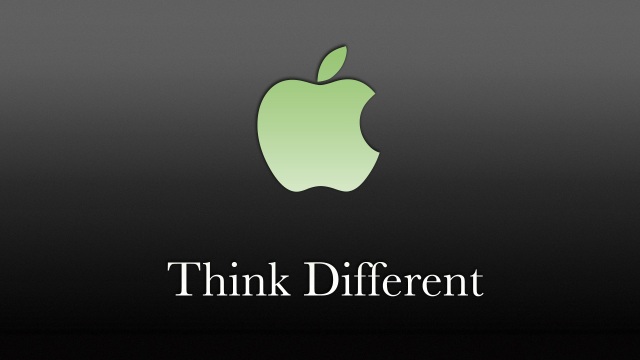 Between 1997 and 2002, Apple Computers (as they were then called) had a highly successful advertising campaign that transformed perceptions of them and their products, while encouraging people to “think different”.

Hold that thought as we delve into today’s Gospel reading.

For the past few weeks we have been hearing excerpts from the Sermon on the Mount, a special collection of teaching material from Jesus.

We shall look more closely at the Sermon on the Mount during the Dean’s Forum in two weeks’ time, but for now let’s just not that this is the classic collection of the teaching of Jesus, an epitome of his spiritual wisdom.

Although only found in Matthew it has been extremely influential over the centuries.

In the Gospel today we heard part of the final section of Matthew 5, a section in which Jesus gives a series of antithetical statement more or less along the lines of:

“you have it said this way in the past … but now I am telling you different!”

In these statements, Matthew is contrasting Jesus with Moses.

For the Jewish Christians who comprised Matthew’s audience this was a controversial idea, even if we have long since become comfortable with the contrast.

It would be rather like a Pope saying, “Well, I know the church has always said this, but now I am telling you we need to think differently about that matter.”

In this series of six antithesis, Jesus ‘ups the ante’ in the following areas of personal relationships:

In what many seem a classic example of hyperbole, Jesus begins his series with the example of homicide.

We might think that is a bit extreme, but pause for a moment and think how common domestic violence is around our country and even right here in Grafton where the rates tend to be twice the state average.

How many women die in Australia due to violence by a domestic partner or family member?

The answer is—on average—one woman dies every week in Australia as a result of violence by her current or former partner.

So this is not some extreme example randomly chosen by Jesus, but sadly a part of everyday life in our most intimate and personal relationships. In the places where we should be most secure from harm, immense harm is happening every day every week all year to women and children.

So Jesus picks up the traditional law: no killing

You heard that in the past he says.

Now this is how I am telling you it needs to be:

More than that—just getting angry with someone else is forbidden.

And more than that—even to insult someone is to fall under divine judgment.

Jesus has really raised the bar, and he continues to do that through the whole series of antitheses in the final half of Matthew 5.

As I wrote in the Daily Morsel for this morning, these are the values of the kingdom, not a checklist for compliance.

But the world would be a better place if more people aspired to these values. Our own lives would be as well.

In times of stress, we are more likely to lash out and to seek to score points at the expense of another person.

Sadly we see this in the life of the church as people struggle with declining numbers and with changing attitudes towards religion.

We are seeing it as well in the diocesan restructure process as people face the prospect of their special place of worship being closed and sold.

Cruel things are said about the bishop, the Cathedral, the diocese, the priest, the town next door, and so on.

The idea of working together is dismissed and people seek to retain what they still have left of the church which has vanished but which they cannot let go.

Such times are hard times for us, just as drought and fire and flood are tough for people on the land.

But we cannot turn on each other when the times become hard for us.

Jesus sets the bar really high: no anger and no name-calling.

We choose love and we choose to care for one another as we navigate these tough times.