What a difference one week can make …

Saturday last weekend we were lined up in the beautifully restored Church of the Nativity in Bethlehem, waiting—along with hundreds of other people—to visit the ancient cave below the altar of the church. That cave has been venerated for almost 2,000 years as the place where Jesus was born.

Earlier we had spent time at some fields where shepherds once tended their flocks, but we did not see any angels on high. We did, however, sit inside a dark cave and read the story of the angels appearing to the shepherds.

Later we visited the cave where Saint Jerome worked on the translation of the Bible from Greek to Latin, a project that would shape the spiritual imagination of the West for another next 1,500 years and in many ways still does.

The Christmas decorations were everywhere that we went, since both Muslims and Christians celebrate the birth of Jesus. Sadly, Jews in Israel are not so inclined to join in the celebrations.

Returning to Australia in the early hours of Thursday morning it was beginning to look a lot of Christmas here as well.

And there is nothing like a child to remind us of the magic of Christmas. Newborns remind us of the holy infant, while older children infect us all with their delight as Christmas beckons us to loosen up and be nice to people.

It has been great delight these past few days to have the opportunity to meet baby James, the newest member of our family, here from Canada for a few precious weeks.

And it is a special privilege this morning to welcome Mitchell Gosson and his extended family as we celebrate his Baptism.

Any noise they and their buddies make is simply part of the sounds of Christmas!

A child to turn the world upside down

For sure they turn our lives upside down as we rearrange everything to provide the love and care they need. And who needs sleep in any case? They evoke love and tenderness from everyone, including complete strangers at the shops!

But what will the future hold?

Running through the readings set for today is the theme “son of David” as a title for Jesus.

We mostly speak about Jesus as “son of God” or even—at this time of year—as “son of Mary”. The church—and especially the church in the West—does not talk so much as about Jesus as ‘Son of David’.

That title suggest a Jesus who goes beyond our comfort zones. He changes stuff. He gets involved. He gets political. And that worries us.

Two weeks ago I was with a group as we visited a small Greek Orthodox Church on the side of the Church of the Holy Sepulchre in Jerusalem. 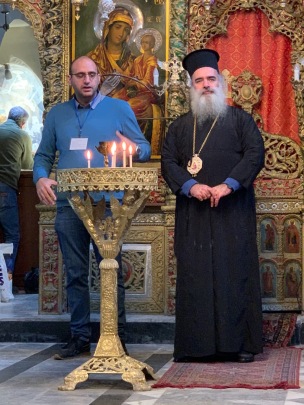 We were there to meet Archbishop Atallah Hanna, an outspoken and courageous Christan leader at a time when his people’s future is being stolen by military occupation and incessant illegal settlements. When there was an opportunity for questions, someone asked if the messages that he gives from his pulpit are as courageous as his actions outside the church.

It was an odd question in some ways, but Archbishop Atallah answered it well.

The courage of a sermon, he said, reflects the character of the preacher. Some priests cannot speak words that give their people hope. They should keep silent. But he will not.

Then two days ago news came through that Archbishop Atallah had been rushed to hospital are being poisoned by tear gas thrown into his church by Israeli soldiers.

I have no idea whether King David was an ancestor of this bold Palestinian Christian, but he is certainly a ‘son of David’. He speaks truth to power. He is bold. He gives his people hope.

Thankfully he is also expected to make a full recovery from the attack.

As son of David, Jesus is not just offering to make us feel better, give us hope or provide assurance of life after death.

As son of David, Jesus turns the world upside down. Our world. The whole world. The world of power and privilege. The world that ignores the scientists warning of climate change until the fires are so bad not even politicians can turn a blind eye.

As we prepare to celebrate the birth of Jesus in the next few days, the son of David invites us to have big dreams for a better world, to live boldy, and to nurture that spiritual boldness in our children.

That is what we sign Mitchell up for as we baptise him here this morning, so let’s go and get the water ready!

1 Response to Son of David