In our first reading this morning we heard the opening scene of an ancient set of stories about Samuel, one of the great figures in the biblical narrative.

We will not go into the whole narrative in the live sermon, but for those reading the online version of this sermon the following graphic might be of interest. 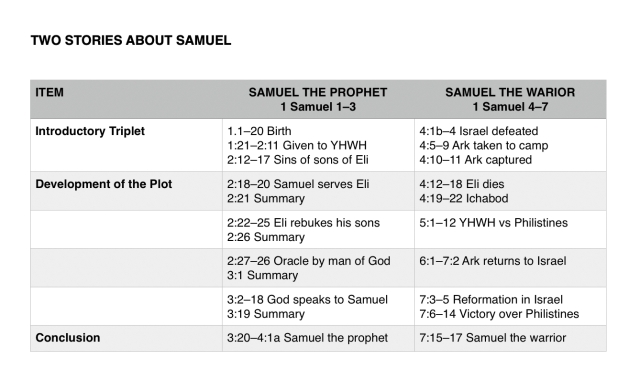 In that table, I am mapping the stories about Samuel prior to the story of Saul, with which Samuel’s story overlaps. I am applying to the opening chapters of 1 Samuel a proposal by Old Testament scholar, Thomas Thompson, about one of the ways in which ancient Israel constructed complex stories by linking episodes of traditional material together like a chain.

In brief, Thompson suggested these ‘chains’ often began with a set of three episodes that establish the basic direction of the story, indicate a problem or challenge, and hint at the final resolution. This opening triplet is then followed by a series of episodes which develop the story, before a final climactic episode in which everything is resolved in a manner that echoes the hints in the third of the opening episodes. While Thompson developed his proposal for Genesis and the first half of Exodus, I have found that this model can also be applied to many other narrative texts in the great ‘primary history’ of ancient Israel: Joshua, Judges, Samuel and Kings. It is way of ‘seeing the forest’ and not simply the trees.

This opening scene in the story of the prophet Samuel begins with a poignant personal situation.

A woman named Hannah (Anne) is married to a man named Elkannah, and she is having trouble conceiving her first child.

Again, as an aside for those reading this text rather than listening to the sermon, we need to note that Elkannah had two wives at the time. We note in passing that ‘biblical marriage’ rarely involved one man being married to one woman, and that there are many different forms of sexual relationships described in these ancient stories. But this text is not offering us a model for marriage. Its focus lies elsewhere.

Of course, in the nature of things, the other woman was not having any trouble producing several children for their shared husband. This is not just a meme from some TV soap opera, but is also a familiar motif in several OT narratives. For the ancient storytellers—and their audiences—such a detail in the story tells us nothing about the gynaecological health of the women. Rather, it is a ‘sign’ that God is at work, and that the child who will eventually be born to the woman who struggles to conceive naturally is going to be a very special person when he grows up.

Just as the ‘three bears’ into whose house Goldilocks stumbles is not a number but a plot scheme, so the barren woman is a set up so that the storyteller can proceed to tell us how God solved that little problem and brought this very special person into the world. So, back to the sermon …

There are a couple of unusual features of this story that we might note in passing before we focus on the main point I want us to consider today.

First of all, this is essentially a woman’s story. That is unusual in the Bible, where most of the stories are told about men and told by men.

Hannah’s story has been shared and remembered by women, no doubt surviving in the oral tradition.

Like the story of Ruth that we have listened to during the last couple of weeks, this story reminds us that women have always had their own perspective on the God story, and men mostly are unaware of it or else undervalue women’s perspective on life and faith.

Hannah not only tells her story but gets her name into the tale. Again, that makes her different from many of the women whose names were not remembered along with their stories. Hannah demands that we hear her story and that we know about her.

Secondly, this is not only a story about and by a woman, but it is about a matter that is central to female identity.

Yes, Hannah has a husband. But he plays a very minor role in the story. She is in charge of her fertility and he is depicted as surprisingly tender and supportive for a Middle Eastern patriarch. This is ‘herstory’, not his-story.

Again, issues of fertility and rivalry with other women rarely get named in church, even though they are a significant part of the lived experience of many women.

So this story of Hannah and her precious baby, Samuel, is unusual and we pay close attention to it for that reason.

Many people can relate to Hannah’s dilemma.

Increasingly couples in our society are struggling with fertility. All of us have friends who have wrestled with this demon and perhaps pursued IVF as one option to resolve it. Some of us here may have been down that road. We may even be ‘IVF babies’ ourselves.

There were no fertility clinics in Iron Age Palestine, so women went to holy places and holy people, seeking a solution. Indeed, they still do, as William Dalrymple records in his beautiful book, From the Holy Mountain (1997). One of the most poignant stories he tells is about the Muslim women from one region in Syria who come to an ancient Christian monastery to pray for the blessing of a child when they seem unable to conceive.

Hannah goes to the national shrine at Shiloh, a site not far from Jerusalem.

There is an old priest serving there.

Eli lacks critical pastoral skills, and perhaps should have been sent off for a Clinical Pastoral Education course. But he is wise enough to listen to the distressed woman he had mistaken as drunk and disorderly. In chapter three he will prove to be a wise mentor when Samuel needs some spiritual advice, but here he is dealing with a distressed woman. And a strong woman. And a woman with her own faith. She will not be turned aside.

So Eli sends Hannah home with a blessing. She falls pregnant. She gives birth to a baby boy, who she named ‘Samuel’, a Hebrew word with a vague pun on the idea that God listens.

Once again, for those reading the online text, the explanation of the name works better if the child is named, Shaul/Saul. Some scholars think that the birth legend of Saul has been hijacked by scribes who preferred Samuel the prophet over Saul the failed first king, but we can set that fascinating historical and textual morsel aside for now, and just go with the final version of the story as we have it in the Bible.

Picking a name for a child is a significant moment, and sometimes a long and complex process. Let’s pause and reflect on that for a moment. Do we know why our own parents chose our name for us? Have we shared with our children the reasons why we chose the names they now have?

Faith at home can be built from sharing such simple yet profound stories.

Then Hannah does something we might not expect and would hopefully never choose to do ourselves. While praying in the temple she made a deal with God: give me a child and I will give him back to you.

This is not to suggest you might like to donate your children to the Cathedral! Even if that is a tempting option at times when the going gets tough. For those times we have CVAS and Mr Oates!

There is a deeper truth in this twist to the story.

Hannah senses that her child is a gift from God.

That is a simple and profound truth for us all.

Our children are gifts. We nurture and shape them, but they do not belong to us. They are bound to us and we to them, but we do not own them.

As parents we are preparing our children to leave—and to become all that God has in store for them; in addition, we are also preparing ourselves to let them go.

We have perhaps seen the tragedy of a person whose parents could never let them go, never let them become free agents living into their own destiny. With God’s grace we can avoid that mistake.

Finally, I want us to think about the in-between time for Hannah and Samuel.

Samuel’s birth will have been a unique and special moment for Hannah and her husband. It is for each us when we hold a newborn in our arms, and wonder what the future holds for this precious little person.

Sooner than any of us, Hannah lets Samuel go. He moves into the life to which he has been called by God and to which his mother releases him.

I am at that point right now with my youngest child, who has just finished her university studies and landed her dream job. It is a poignant moment. A moment of deep joy and hope for the future.

But what about the in-between time, the time between the birth of the child and the departure of the young adult?

During that in-between time we nurture, we love, we shape, we support, we educate and we empower our children so that they can become all that God offers them and all that we wish for them.

What we are doing here this morning is one step through that ‘in-between’ time.

As they claim their place at the Table of Jesus, we celebrate the journey they are making and we rededicate ourselves as parents, family, school and church to be there for them as they become the people God is calling them to be.

2 Responses to The precious in-between time