THIS past week we have walked the road to Calvary:

Today we begin our Easter celebrations. They will stretch through the next 50 days. Long after the shops have removed the hot cross buns—along with the ANZAC biscuits and the Mother’s Day cards—the church will still be celebrating Easter. Our paschal candle will burn brightly at every service from today until Pentecost: the Great Fifty Days of Easter.

This ‘week of weeks’ is a symbol of prophetic fulfilment and cosmic abundance, with roots going deep back in time to the annual grain harvest in Palestine.

Across Jerusalem and throughout Palestine this morning, the faithful are greeting one another with the Easter proclamation: 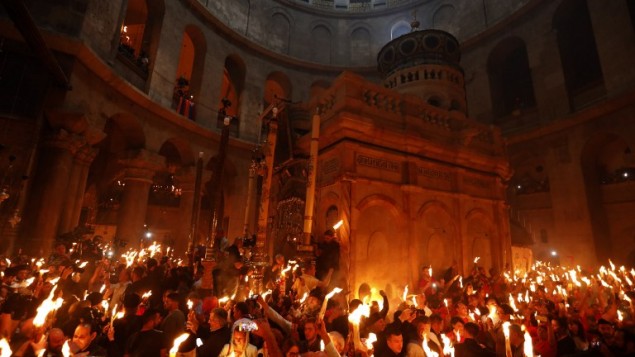 Here in the Antipodes, far from the empty tomb, we join the worldwide celebrations.

Let’s take this opportunity to reflect on the meaning of Easter, to look at life through resurrection eyes.

What difference does Easter make: for Jesus? for the world? for the churches here in the Bay?

In very broad terms, let me suggest that in the events of Easter we glimpse God’s hopes and dreams for the future of the world, indeed for the entire universe.

This is the good news that lies at the heart of our Holy Saturday celebrations last night.

When Jesus walked out of Hell on Easter morning, no-one was left behind.

To summarise the message from last night, let me repeat just a few lines from that sermon:

In the end, when God’s love has penetrated even the darkest recess of Hell, no-one will be left behind. God’s love will bring everyone with Jesus into the future God has prepared for his creation.

At Easter Jesus passed through and beyond death. There was no detour for him, just as there will be no detour around death for us. To experience what lies beyond death Jesus had to pass through death.

But his cry of dereliction on the cross—”My God, my God, what have you forsaken me?”—was met and matched by God’s eternal vindication.

The fear and hatred directed at Jesus did not have the final word.

In the end, love won. It always does.

The ancient Christian hymn already known by Paul and the Christians at Philippi, includes these lines:

… and being found in human form,
he humbled himself
and became obedient to the point of death
—even death on a cross.
Therefore God also highly exalted him
and gave him the name that is above every name … (Philippians 2:7–9 NRSV)

Some scholars have tried to express the difference Easter made to Jesus by speaking of “Jesus before Easter” and the “post-Easter Christ”.

Jesus before Easter speaks of God’s kingdom, which is in deep opposition to Empire (about which I shall say more in a moment). After Easter, we recognise the risen Lord as not just the prophet of the kingdom but also, in some sense, the one who gives us access to the reign of God, the empire of love.

Here I think we can learn something very important from the Eastern Christians. For them, salvation is best expressed not as life beyond death, but as the divinization of humankind. God becomes human in Christ, so that all of us can become divine in Christ. Immanuel.

That changes everything, and not just for Jesus.

A world beyond empire

It was nothing personal. Empire kills anyone it cannot control. Jesus would not march to the beat of empire’s drum, so Jesus had to die.

By empire we mean that system of power which allows a privileged elite to exploit and control others for the advantage of the elite. Empire is about domination and privilege. It exploits the poor and the powerless, and distracts us with bread and circus.

These days the ‘bread and circus’ that keep us quiet in the face of such injustice may take the form of superannuation and sport, or maybe it is Facebook. Whatever its form, it works well to keep us acquiescent—until Jesus opens our eyes.

Easter demonstrates that the Empire is broken.

Empire’s awesome projection of absolute power over us is flawed. The golden statue has earthen feet. Easter has exposed the ultimate inability of Empire to define us or our future.

Jesus was right to proclaim the kingdom of God, the basileia tou theou. We can choose whether to remain enthralled by Empire, or to embrace the reign of God, the commonwealth of love.

We can opt out of Empire.

Empire remains powerful. It killed Jesus and may kill us. It is not just a metaphor, as the victims in Syria have again reminded us so tragically in the past few days.

In the end, Empire need not define us.

In the end, Love wins.

If that is true—and Jesus staked his life on it being true—then the world would be a different kind of place, if only we took it seriously.

But Jesus has defeated Empire. Jesus has broken the power of death. Jesus has set us free to imagine a new kind of world.

Let make all this lofty rhetoric local. How might Easter make a difference to the way that the Christian churches operate here in the Bay?

For starters, we would stop worrying about survival, since we would realise deep within our bones that God has the future under control. In the end love wins. We are on the winning side of history. It does not all depend on us. Recall the Immanuel principle. God is among us and working to achieve God’s own dream for the universe. In the end love wins.

What if we transferred our best emerges from fear to hope? What might be some of the core attributes of a church—regardless of its tradition—that took Easter seriously?

We would become centres of resistance to Empire as we focus on what matters to God, and not what matters to the powerful and the wealthy. We would be communities that are passionate about social justice, about refugees, about world peace, and about community well-being. We might even find ourselves in trouble with the authorities because of our courageous action to make the world a better place.

We would reclaim our original vocation as stewards of creation. In the ancient creation stories in Genesis, humans are fashioned out of the earth and our primary task is to care for the garden. The integrity of creation matters to God, and churches that take Easter seriously will be communities that care deeply about the environment. Here in this beautiful part of Australia, our passion for creation may mean that we find ourselves in coalition with people of very different beliefs, but with a common concern for the world that we believe is also a beneficiary of God’s game changer at Easter.

Each of these kingdom of God communities will be an oasis of authentic spirituality. We will be a community of practice that moves beyond affirmation to action, helping each other to shape lives that are ‘holy’ and ‘true’. We will work alongside people of different faiths, and Christians from different traditions, confident that—in the end—love wins.

What a blessing we would be to the local community here in the Bay, if we redirected our best energies from institutional survival to a passion for human flourishing.

Imagine a world blessed by such an expression of Easter faith.

Anglican priest and religion scholar. Senior Lecturer in the School of Theology at Charles Sturt University. Dean, Cathedral Church of Christ the King, Grafton and Rector of the Anglican Parish of Grafton. Formerly Dean at St George's College, Jerusalem. The opinions expressed in my publications, including my blog posts, are my own and do not necessarily reflect the views and opinions of the Diocese of Grafton nor Christ Church​ Cathedral in Grafton.
View all posts by gregoryjenks →
This entry was posted in Byron Bay, Sermons. Bookmark the permalink.

1 Response to Through resurrection eyes