TONIGHT we begin our Easter celebrations. they will stretch through the next 50 days. This ‘week of weeks’ is a symbol of prophetic fulfilment and cosmic abundance, with roots going deep back in time to the annual grain harvest in Palestine.

As a vigil service, this liturgy invites us to reflect on the role of ritual in our faith, but also in our personal lives. Ritual enhances, deepens and magnifies the inner reality that we are observing.

A candlelit dinner is not about a suitable lumen count. It is a ritual that suggests intimacy and love.

On this night we dig deep into the church’s treasure chest to choose some rituals that we hope are especially apt for the occasion.

In the Jewish calendar the new day begins on the previous sunset, so in biblical time we are already in the early hours of Sunday, the first day of the week. We observe such “eves” in the liturgical life of the church, but they mostly pass unnoticed. Christmas Eve is well known, but the Eve of All Hallows (All Saints), is not so easily recognised in its contemporary guise as Halloween.

Without iPhones and electric lights, nights were long and dark in the ancient past. Fires were lit to keep the darkness at bay, and to warm the cool evening. The community gathered around the fire, to share stories, and to deepen their life together. The light of the fire shattered the darkness, perhaps evoking memories of a burning bush or a pillar of fire.

Saving Adam
In the Orthodox tradition Adam plays a bigger role at Easter than in our Western traditions.

Golgotha, the ‘place of the skull’, is understood to be the place of Adam’s burial. You will see his skull below the cross in most Orthodox icons of the crucifixion. As Jesus, the second Adam, dies on the cross, his blood brings new life to old Adam.

We also see this expressed beautifully in the icons of the Anastasis, the Resurrection, as the triumphant Christ raises Adam and Eve from their grave as he himself rises from the dead. 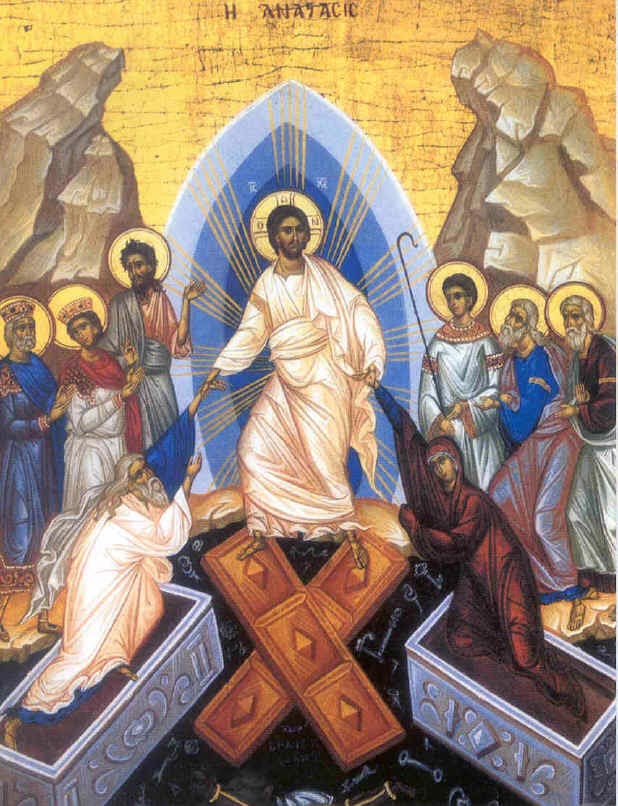 These are poetic ways of doing theology, but if we have ‘eyes to see’ then we can discern the deep truths in these ancient symbols. As the Second Adam, Christ brings new life to Adam and Eve, and to us all as their children.

There is another Easter tradition that is especially relevant to today, Holy Saturday. 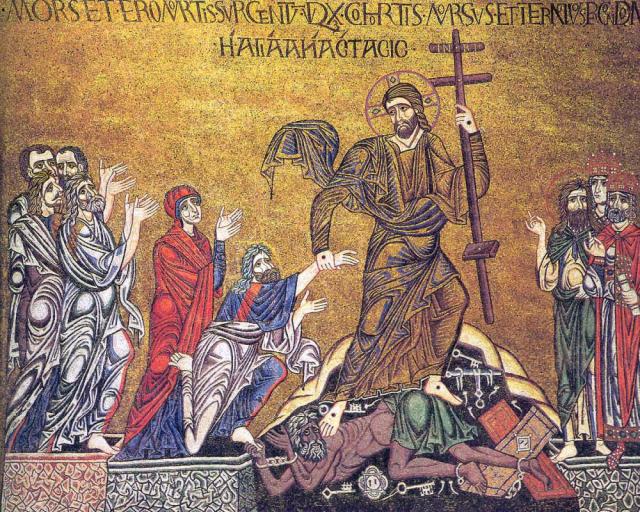 We find this tradition preserved in 1 Peter 3:

For Christ also suffered for sins once for all, the righteous for the unrighteous, in order to bring you to God. He was put to death in the flesh, but made alive in the spirit,in which also he went and made a proclamation to the spirits in prison,who in former times did not obey, when God waited patiently in the days of Noah, during the building of the ark … (1 Peter 3:18–20 NRSV)

It is also preserved in the Apostles’ Creed, as well as in a number of ancient extra-canonical Christian texts.

This idea has largely dropped out of favour in the West, but it preserves another way of thinking about Easter. In this tradition, Jesus uses the time between Good Friday and Easter Day to visit Hell, and while there he destroys the place. On Easter Day, Christ marches out of Hell followed by a great procession of people from all times and places who he has set free from death.

What a powerful antidote to the religion that exploits fear of being ‘left behind’ to pressure people into particular expressions of Christianity.

In the end, when God’s love has penetrated even the darkest recess of Hell, no-one will be left behind. God’s love will bring everyone with Jesus into the future God has prepared for his creation.

Rather than asking how much of this stuff we really need to observe, we are better to respond with grateful hearts. We can choose to put aside a compliance mentality that seeks the minimum required to gain a passing grade. We can choose instead to embrace the rituals that speak to us, those that touch us—and transform us—most deeply.

What matters most is not that we get the ritual right this evening, but that we have the life of the risen Christ within us.

Christ is risen!
He is risen indeed.

Anglican priest and religion scholar. Senior Lecturer in the School of Theology at Charles Sturt University. Dean, Cathedral Church of Christ the King, Grafton and Rector of the Anglican Parish of Grafton. Formerly Dean at St George's College, Jerusalem. The opinions expressed in my publications, including my blog posts, are my own and do not necessarily reflect the views and opinions of the Diocese of Grafton nor Christ Church​ Cathedral in Grafton.
View all posts by gregoryjenks →
This entry was posted in Sermons. Bookmark the permalink.

3 Responses to None left behind