Today was an optional day in the program. We visited Masada and Qumran, and had an opportunity for a ‘swim’ (well, more a float) in the Dead Sea. About five people from the course took the option of staying behind in Jerusalem, while the remainder came with me to Masada towards the southern end of the Dead Sea.

It was again my privilege to serve as group leader for the day, so I guided people around the major features of the this site. One of the highlights is always the triple palace at the northern tip of Masada.

We also explored Herod’s luxurious bath house, and the room where archaeologists found the 10 pottery shards (ostraka) with the names of the Jewish rebels who would kill the other men, and then each other, after all had killed their own wife and children. All around the mountain we could see the remains of the siege wall that encircled the entire site, as well as several Roman army encampments. We studied the intricate water system, and visited the synagogue in which the rebels prayer for a deliverance that never arrived. We went down the steps to the lower levels of the Northern Palace, and we saw the ancient Roman siege ramp at the Western gate.

A brief video of our descent from Masada in the cable car is available online.

After leaving Masada we drove about 30 minutes north to Qumran, where we had lunch and then explored the modest ruins of the Essene settlement. Where Masada speaks of power and exploitation, Qumran testifies to the power of religion to shape alternative visions of divine justice.

The final part of today’s schedule was to visit Kalia Beach and experience the Dead Sea. 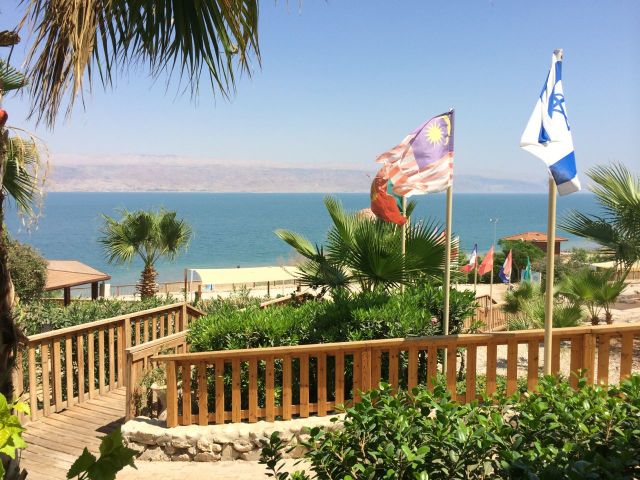 By the end of the day a tired but contented group of explorers had arrived back at College and were heading for the showers, and our beds for a nap before dinner.

For my part, I had dinner with a friend at Ecce Homo and then we walked to a nearby Arab hotel to enjoy drinks on its rooftop cafe. The Old City was alive with Ramadan celebrations, and it was so good to see the crowds enjoying their religious festival. The Damascus gate was a blaze of colour and sound.

Anglican priest and religion scholar. Senior Lecturer in the School of Theology at Charles Sturt University. Dean, Cathedral Church of Christ the King, Grafton and Rector of the Anglican Parish of Grafton. Formerly Dean at St George's College, Jerusalem. The opinions expressed in my publications, including my blog posts, are my own and do not necessarily reflect the views and opinions of the Diocese of Grafton nor Christ Church​ Cathedral in Grafton.
View all posts by gregoryjenks →
This entry was posted in Archaeology and tagged Dead Sea, Masada, Qumran. Bookmark the permalink.