Today the focus of the Palestine of Jesus course has been on the events of Holy Week, as we visited several sites associated with Gospel traditions from the final days of Jesus. As I write this blog the events from this morning seem a long time ago, as we are currently experiencing an upsurge in the violence between Israel and Hamas, with air raid sirens sounding across several Israeli towns—including Jerusalem and Tel Aviv.

Meanwhile, back on the schedule …

We began the day with a visit to the Mosque that celebrates the Ascension of Jesus. This mosque is on the site of an earlier Byzantine Church, and some of the original columns of the open structure (which had no roof) can still be seen: 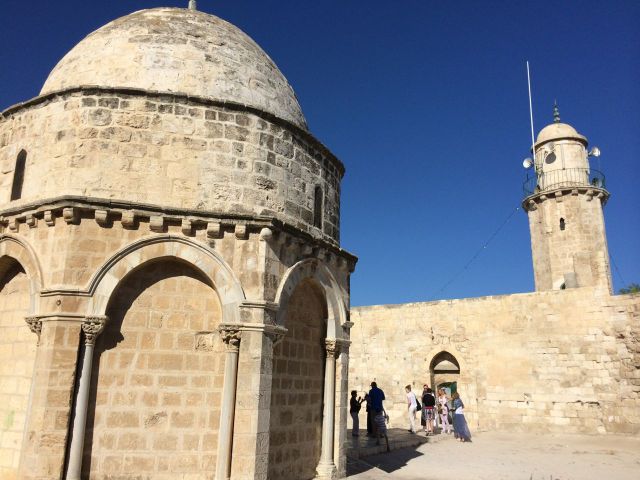 From the Chapel of the Ascension we continued our exploration of holy sites on Mt Olives by going to the Church of the Pater Noster (that celebrates Jesus as a prophetic teacher, in this case the Lord’s Prayer) and the Palm Sunday Church at Bethpage: 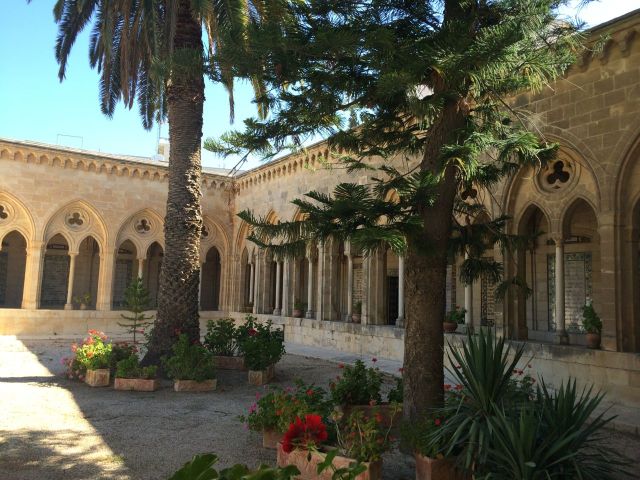 We then walked down the slope of Mt Olives towards the Kidron valley and the Old City:

We spent some time at the iconic Dominus Flevit church with its wonderful views across to the Dome of the Rock:

Finally we went down to the Church of All Nations in Gethsemane that commemorates the agony of Jesus and his arrest:

In the afternoon we visited the traditional site of the Last Supper and Pentecost. This is one of the most hotly contested sites in this city, as a Jewish nationalist organisation has occupied the lower level with its ‘Tomb of David’ and is destroying the material evidence of many centuries of Islamic presence in the building. For our part, the Cenaculum is a large 14C Gothic structure, that has been venerated for centuries but has little claim to authenticity—not least because the events commemorated are themselves most likely fictional. Clearly, such questions do not deter the crowds.

I especially like this detail of a mother pelican feeding her young with her own flesh and blood—a nice Eucharistic touch.

After leaving the Mt Zion area we walked a short distance down the hill to the modern church of St Peter in Gallicantu that commemorates the trial of Jesus and his denial by Peter (‘before the cock crowed’). This is another impressive modern Catholic church, built on the remains of an earlier Byzantine or Crusader church, and offers some unusual angles on the Old City and the nearby Palestinian neighbourhoods.

On the way back to the College I stopped  by my friend Ibrahim’s store in Nablus Road, and we went through some of his coins that were for sale. To my single coin from Year Two of the Jewish Revolt (ca 67/68 CE), purchased yesterday, I have now added these three coins: 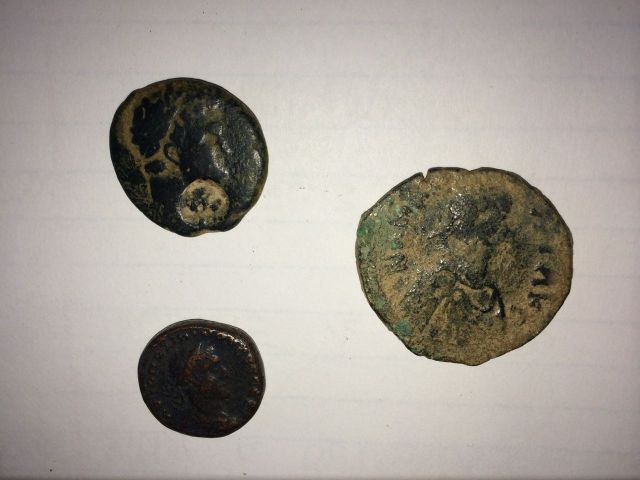 As the day drew to a close we learned that Israel had called up 40,000 army reserves to supplement its significant standing army in preparation for an invasion of Gaza. IDF planes have been bombing Gaza throughout the day, while rockets continued to be fired from Gaza into southern Israel. By early evening the government had ordered public bomb shelters to be opened, and we were soon given our first taste of an air raid siren. We assume the night will mostly pass without significant incidents, and look forward to our final day of the course tomorrow.

Anglican priest and religion scholar. Senior Lecturer in the School of Theology at Charles Sturt University. Dean, Cathedral Church of Christ the King, Grafton and Rector of the Anglican Parish of Grafton. Formerly Dean at St George's College, Jerusalem. The opinions expressed in my publications, including my blog posts, are my own and do not necessarily reflect the views and opinions of the Diocese of Grafton nor Christ Church​ Cathedral in Grafton.
View all posts by gregoryjenks →
This entry was posted in Archaeology, Bethsaida, Coins, Uncategorized and tagged Ascension, Bethpage, Cenacle, Church of All Nations, Dominus Flevit, Gethsemane, Mt Olives, Mt Zion, Pater Noster, Peter Gallicantu. Bookmark the permalink.