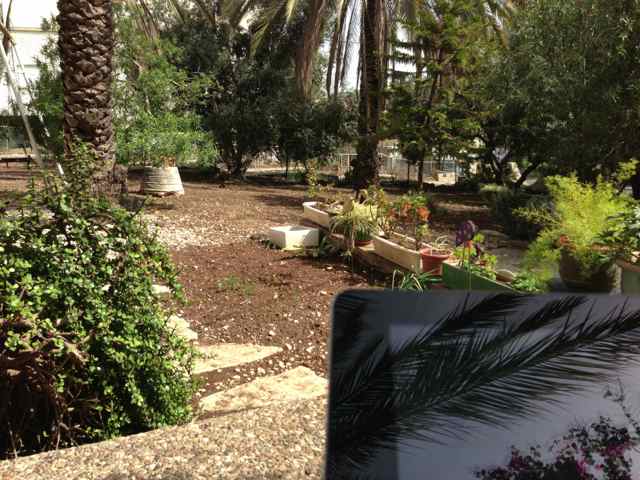 A sunny morning in Tiberias catching up on reading

It is now three weeks since I arrived in Israel for my sabbatical, and the place is abuzz with preparations for Passover and—for the Western Christians in Jerusalem—Holy Week.

For the local Christians, Easter will be observed on the first weekend in May and outside Jerusalem all the Christian communities have agreed to observe the Orthodox calendar this year. This creates some liturgical dissonance for visitors such as myself, but I welcome the grassroots collaboration between often competing Christian communities and rejoice in the messiness of it all.

The shops have been crazy; like a pre-Christmas shopping frenzy back home. And I am told the traffic will be chaotic after the weekend as people take advantage of the holidays to visit family and friends.

During this third week of my study leave I seem to have settled into more of a pattern. I went to Jerusalem on Sunday, without needing to use the GPS (despite taking at least one wrong turn in the process). Not long after arriving at St George’s College I ran into John Stuart, an Australian serving as chaplain to SGC this year, and we made arrangements to celebrate St Patrick’s Day at a nearby Irish Pub in West Jerusalem. O’Connells did not offer Irish Stew (despite it being on the menu), so we settled for “Australian Burgers” and Guinness. It was lovely couple of hours, and we found that we have so much in common. Finding such interesting people in unexpected places is one of the joys of travel.

Monday and Tuesday were spent in the coin department at Israel Antiquities Authority beneath the Israel Museum in Jerusalem. Some real progress has been made with the coin database project, although at times it seems that really just means I am getting a clearer sense of the mess I am seeking to clean up.

The other major project on my agenda is beginning to call for my attention. Before my study leave is finished, I need to have the first draft of a new book for Polebridge Press. This will be the long-awaited (by me, at least) ‘Jesus book’ and it will draw together some of my work at Bethsaida, as well as other historical Jesus projects and biblical studies. The last few days I was able to spend some time on questions around the towns Jesus visited and avoided, including what we now know about Nazareth in the first couple of decades of the Common Era.

While at a wonderful concert in Nazareth on Wednesday evening, I met a local gentleman with a deep connection to Nazareth Village project. We soon discovered that we hold very different views on the size of Nazareth in the first century, and the date of its founding as a Jewish village. He has offered to guide me through some of the local archaeological sites not open to tourists, and I am very much looking forward to that. In the meantime I have done some further reading on the key archaeological investigations at Nazareth so I am well prepared for our discussions (and re-assured in my existing opinions!).

It has been good to have a break from the obsession with coins, although it was a real thrill to hold in my hands this last week a coin minted by Cleopatra during her ill-fated relationship with Mark Antony, as well as a coin of Agrippa II (who crossed paths with Paul of Tarsus according to Acts 25) dated to 82/83 CE. This date is about 10 years after the end of the Jewish War, while Agrippa continued to reign—and around the time that Josephus was sending Agrippa drafts of his own book project, The Jewish War, for comment and correction. Both coins were found at Bethsaida in 2012.

With the imminent holy days I am planning to take a break from the research and enjoy time with friends here. I suspect the highlight 0f the next few days will be a visit to the Herod exhibition at the Israel Museum on Sunday. I have walked past it several times already, so now I plan to go and see the exhibition for myself. From all reports it is definitely well worth seeing.

Anglican priest and religion scholar. Senior Lecturer in the School of Theology at Charles Sturt University. Dean, Cathedral Church of Christ the King, Grafton and Rector of the Anglican Parish of Grafton. Formerly Dean at St George's College, Jerusalem. The opinions expressed in my publications, including my blog posts, are my own and do not necessarily reflect the views and opinions of the Diocese of Grafton nor Christ Church​ Cathedral in Grafton.
View all posts by gregoryjenks →
This entry was posted in Archaeology and tagged Bethsaida, Herod, Nazareth. Bookmark the permalink.